Think only a new convertible could spark your desire? 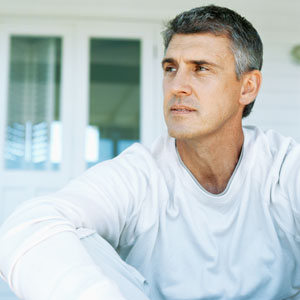 Do not let low hormone levels bring you down.

Is male menopause a true medical condition or just a good punch line when you’re 50-something and not feeling quite yourself?
You know, “Oh, that male menopause must’ve kicked in”?

Could your doctor really diagnose male menopause, or is it merely a phrase that Oprah or GQ use to hook you?
My middle-aged male editor wanted to know. No punch lines here, my friend, er, boss.
There is such a thing as male menopause (though technically the name is all wrong – but we’ll get to that).
Is every man destined for the same hot flashes and mood swings they dread to see in the women they love?
That’s another story.
But the hormonal change is real and so are a multitude of symptoms that can accompany it – from a loss in libido or erectile dysfunction to fatigue or depression. And, yes, sometimes even night sweats.
Every woman who lives long enough will experience menopause – a (permanent) pause in her menstrual cycle that signals the end to the steady stream of the hormone estrogen her body makes. Hence the name menopause. Normally, this happens between the ages of 45 and 50. And the dramatic drop in hormones can trigger all sorts of physical and psychological changes.
Conversely, the hormone faucet in men never turns off. But the flow of testosterone does begin to gradually decrease at a rate of about 1 percent a year beginning at age 30. And for some men, the result over the years can be simply unpleasant or potentially life-changing.

While some call it male menopause, doctors often call these age-related hormone changes in men “andropause” – from the word androgen, a term to describe hormones such as testosterone.

How common is it?
It’s unclear how many men develop andropause. A study of more than 3,000 European men published in the June 17 issue of The New England Journal of Medicine suggests the number is only perhaps 2 percent of the population. Anecdotally, some doctors say that number seems low.
“It’s certainly higher than that one study would suggest,” said Dr. Lawrence Hakim, chairman of the Department of Urology at the Cleveland Clinic in Weston . It may be a matter of definition, Hakim and others suggest.

Diagnosis a challenge
There is no single way to test for andropause, explains Dr. Robert Tan, author of The Andropause Mystery and founder of the OPAL Medical Clinic, which specializes in men’s health and aging.
A lab test is needed to figure out how much testosterone a man produces, plus a look at his overall health.
How low is low testosterone? It depends who you ask.
Studies have defined low testosterone in men as 250 nanograms per deciliter, while others cite 300. Men in their 20s and 30s typically have testosterone levels in the 600 range. But a low number by itself is not enough. “Every man is different,” said Dr. Erik Castle, a urologist with the Mayo Clinic in Arizona. “You may have a 70-year-old who is healthy, never smoked, eats right, has low testosterone, but is fine. You have another, maybe he didn’t live so cleanly and now is unhealthy and not feeling well.” For that guy, Castle says, you have to look closer.

What are you looking for?
Erectile dysfunction. Reduced sex drive. Fewer morning erections.

Doctors also often look for fatigue, problems walking long distances, bending or stooping. And even if you have low testosterone and you’re tired, your problem could be something else entirely – diabetes, thyroid issues, a side effect from medication or alcohol abuse.

Hormone therapy poses risks
Doctors once addressed andropause only when a man complained that his sex life was suffering, Mayo Clinic’s Castle said.
“But over the last 10 years, the emerging evidence is that this may not just be a quality of life issue because they can’t get erections,” Castle said, “Now we think it could be a health issue as well.” He said men with truly low testosterone levels can have lower bone density, and may be at greater risk of diabetes or coronary artery disease.

Now men and their doctors can consider replenishing the testosterone if those health risks are in play. But proceed with caution.

Google “male menopause” and you may be steered to a screen full of “health centers” touting hormone therapy for a myriad of ills.

“You really want to seek out a center where you can work with a urologist, an endocrinologist,” Hakim of Cleveland Clinic said. “It’s part of the bigger picture. These places tend to focus on one thing – not the big picture.”

And, just as women must consider the risks of hormone therapy, so should men, advises the Mayo Clinic.

In its primer on male menopause, the clinic notes “Testosterone therapy has various risks.”

Such therapy could contribute to sleep apnea, put you at greater risk for heart disease, cause skin problems or stimulate the growth of existing prostate cancer.

Tan, the author who first published on the topic a decade ago, says he can’t help but notice how the public awareness of andropause has grown.

“There has been more interest, scientific work and certainly more patients coming forth with symptoms and treated successfully.”

When MALE MENOPAUSE
kicks in …

Some men have lower than normal testosterone without signs or symptoms. But others may experience: